Home » Blockchain Technology: A Positive Disruptor Of The Shipping Industry

Blockchain Technology: A Positive Disruptor Of The Shipping Industry

Global trade is a massive commercial ecosystem. According to the World Trade Organization (WTO), this business is valued at more than $29 trillion CAD. But currently, this industry is being run on a decades-old infrastructure plagued by paperwork and bureaucracy. Running a $29-trillion-dollar industry with an antiquated system is not only impractical, but it’s also a recipe for disaster.

Currently, the shipping industry is heavily controlled by freight brokers, who facilitate transactions of loads from shippers to carriers. This process increases costs for carriers and also increases prices that directly affect consumers. A big part of the problem is that supply chain data is not always available, visible, or trusted.

Here at BorderBuddy, we have received many accolades for being tech innovators. We developed and launched the unique, innovative Customs Duty Calculator to take import/export logistics to the next level. We are intrigued to understand how blockchain technology is already making inroads to make this industry more efficient, and we’re passing on what we have learned in this article.

Although many people still are unfamiliar with what blockchain technology is, it’s something we all need to be aware of. It is usually associated with Bitcoin, but there is so much more to understand about how this technology functions, and what it is capable of accomplishing. In fact, the implication for blockchain technology to revolutionize the shipping industry is already underway.

This is an overview to explain the basics of blockchain technology, and how it is changing the way global trade is conducted.

This tutorial by ihodL explains the basic concept of blockchain:

Blockchain is a distributed database existing on multiple computers at the same time. It is constantly growing as new sets of recordings, or ‘blocks’, are added to it. Each block contains a timestamp and a link to the previous block, so they actually form a chain. The database is not managed by any particular body; instead, everyone in the network gets a copy of the whole database. Old blocks are preserved forever and new blocks are added to the ledger irreversibly, making it impossible to manipulate by faking documents, transactions, and other information.

How exactly is blockchain technology being utilized to revolutionize the shipping industry? 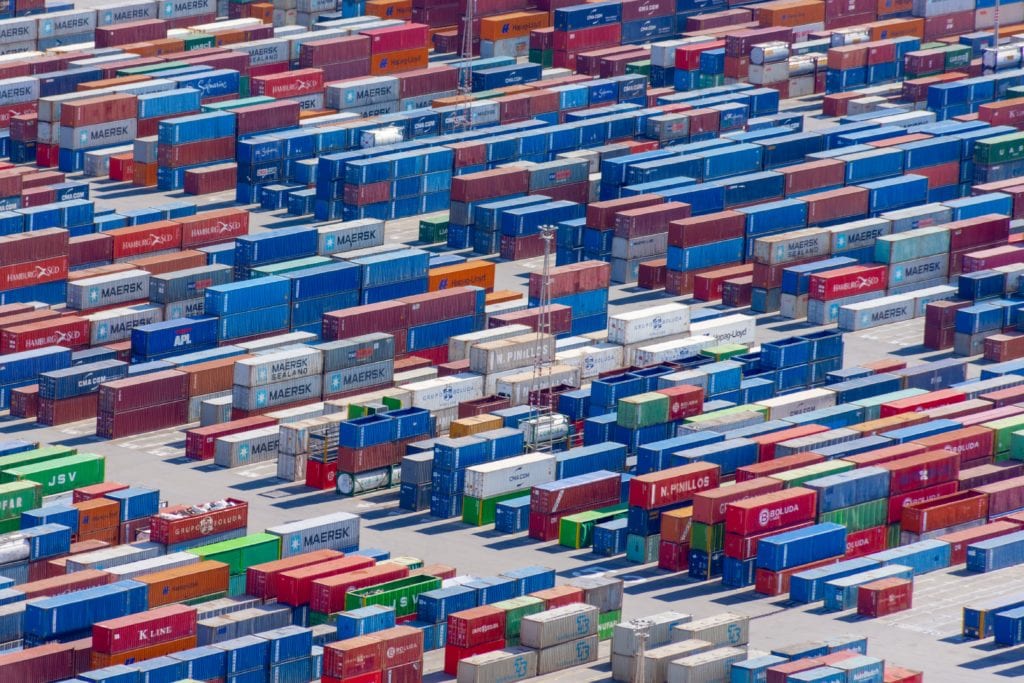 Blockchain for supply chain is definitely the way forward for streamlining operations because it can be used as a registry for transactions. The blockchain associated with a group of assets can be updated as it moves through the supply chain. It can be modified at different intervals each time those assets move from one party to another.

Once shipments are confirmed and recorded on the blockchain, they are immutable, meaning no party can fraudulently manipulate the records or dispute the validity of the transaction.

UPS is one of the first shipping giants to hop aboard the blockchain bandwagon. They recently announced they were going to join the Blockchain in Transport Alliance (BiTA), a forum for the development of blockchain technology standards and education for the freight industry.

Linda Weakland, UPS’s Director of Enterprise Architecture and Innovation, is long on blockchain. She says, “It has multiple applications in the logistics industry, especially related to supply chains, insurance, payments, audits, and customs brokerage. The technology has the potential to increase transparency and efficiency among shippers, carriers, brokers, consumers, vendors, and other supply chain stakeholders.”

One of the many startups using blockchain technology to improve the efficiency of shipping escrow by removing or limiting the intermediaries involved is ShipChain. They bill themselves as the end-to-end logistics platform of the future: trustless, transparent tracking.

Maersk Line, the world’s largest container-shipping company, has already teamed up with IBM to apply blockchain to track its cargo shipments in order to reduce the mountains of paperwork associated with each shipment.

In addition to supply chain management, blockchain is useful as a registry for assets like patents and property.

Transparency and visibility are incredibly important for the peace of mind of anyone involved in the importing and exporting of goods. Blockchain ledgers include key information about who has custody of goods and where those goods are located. This is especially important for goods like pharmaceuticals, food products, and electronics.

Because blockchain can operate outside institutions and within a peer-to-peer network, transactions are quicker and less expensive. Payments within a blockchain network can be especially beneficial where cost, trust, and time are an issue, like in cross-border transactions.

Blockchain, by definition, is independent and secure. There are decentralized and immutable ledgers — networks that have no single point of failure, which are maintained by multiple parties. The information in these ledgers cannot be corrupted or hacked.

Is blockchain the next great disruptor?

Yes! The potential for blockchain to streamline logistics cannot be overestimated. Although the promise of this technology is still very much in its early days. As of now, a shipment from East Africa to Europe could require approvals from as many as 30 different parties.

Ultimately, if adequately leveraged, blockchain will give customers the opportunity to participate in freer, more efficient, less costly, transparent global trade. Carriers and shippers are optimistic that this technology holds the key to supporting the industry’s growth for years to come.

Give BorderBuddy a call to provide customs solutions today.